Under the Bed slot is a Betsoft Gaming Software powered 3D online slot game. There is a cute cartoonlike look to the game with a theme based on the monsters beneath children’s beds. The story revolves around Jesse and Jane, a brother and sister, who fight the monsters that live beneath their beds.

The reels are set on the footboard of a bed and the brother and sister stand to the right side of the reels. They are animated throughout the game. Under the Bed slot is a five reel game with three rows of 3D symbols and up to thirty pay lines. There is also a wild symbol feature, two separate bonus game features and a double up gamble feature.

The thirty Under the Bed slot pay lines are selectable and allow up to five coins on each. Coin values are from 0.02 up to 0.50. There is a max bet feature to automatically place the highest bet amount on all thirty pay lines.

Under the Bed real online pokies has a top pay out of 2 500 coins for five Jane’s with the maximum bet. Jesse pays out up to 2 000 coins. The other paying symbols include their parent’s legs, a one eyed monster, an orange monster, a green monster, the bedroom lamp and the bedroom window. These symbols pay out anything from 25 coins up to 1 500 coins for matching symbol combinations on active pay lines.

The symbols must be lined up on a pay line three, four or five times in order to count as a winning combination. The pay lines start from the far left reel and run towards the right. You can play this slot at internet based casinos like https://canadiancasinosites.org/review/gaming-club/

There are a few special rimmed Under the Bed slot symbols which are key to triggering the sticky wild symbol feature. When one of these special rimmed symbols forms part of a winning combination one symbol will flip over to become a wild symbol with a number on it to represent the number of spins the wild will remain in position for. 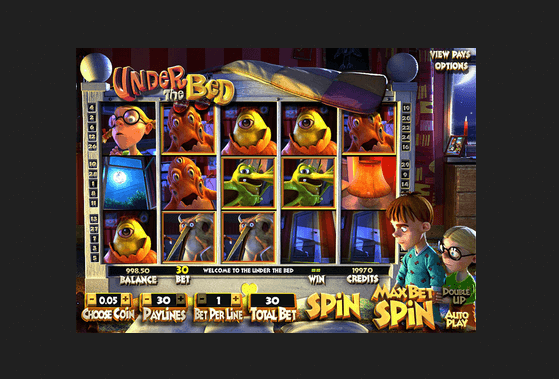 The bed bonus game is triggered when at least three of the bed bonus symbols land scattered across the reels. The bonus is a type of card picking game where cards are picked to reveal various monsters and various cash prizes. The cards will be picked until the card that reads collect is revealed.

The symbol with a door must land on the third reel in the middle position for the Under the Bed slot free spins feature to be triggered. Twelve free spins are awarded with a 2x multiplier on all free spin wins.

After any standard win the gamble feature may be triggered by clicking on the double up button beneath the reels. A monster will roll dice but the aim is to guess whether he will roll an odd number or an even number. A wrong guess results in the end of the feature and the win being lost. This feature is not applicable to free spins wins or during the bonus game.