Mystery Star is a Novomatic creation with five reels and five pay lines. It is an online slot game with a classic feel as the symbols are all represented by simply designed classic fruity images but the overall theme of the online slot revolves around stars and space.

The main screen displays all of the regular game function buttons that allow the pay lines to be enabled and bets to be set. The value for each enabled pay line can be set at denominations from 0.08 up to the maximum of 20.00. This makes the minimum bet per spin a value of 0.40 and the maximum betting amount a value of 100.00. As with all online slot games, the higher the value of the bet placed, the higher the winning amount will be. There is also an auto play option to have the reels spins automatically without interruption.

Symbols on the Mystery Star Reels

The Mystery Star symbols do not follow the stars and space theme but they are represented by classic fruit, bells and seven symbols. They need to line up left to right to pay out and some only need to be two in a row. 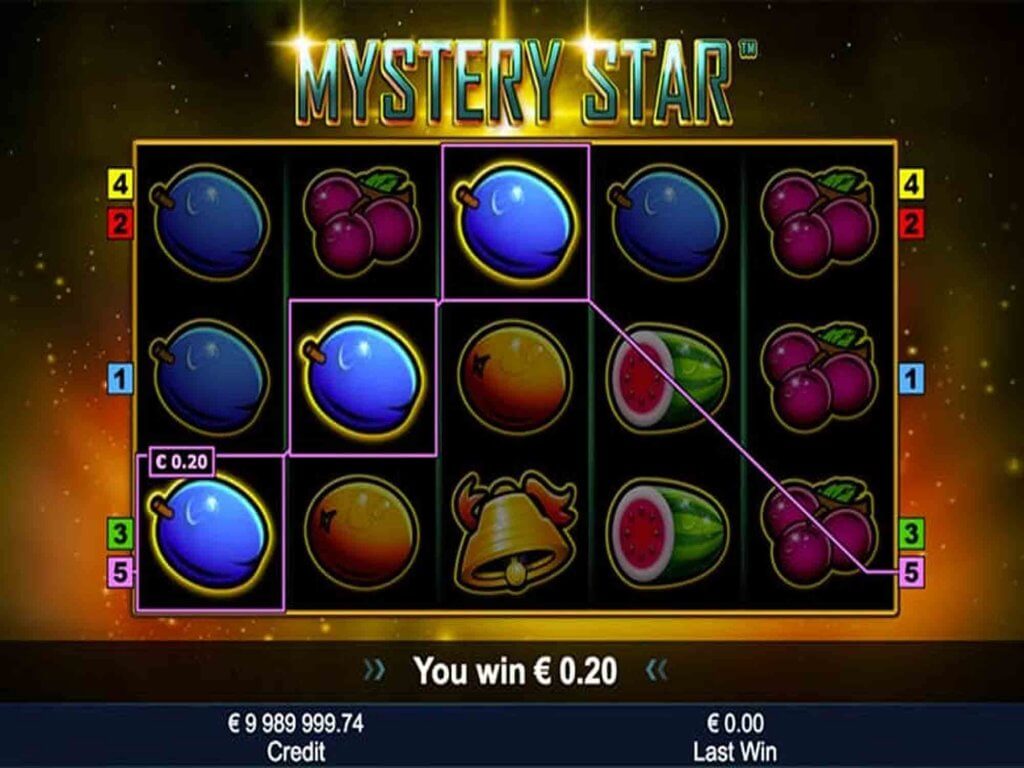 The gold star symbol is the Mystery Star scatter. The title of the online slot game refers to the mystery about this scatter symbol at there is no predetermined amount it will pay out. Being a scatter symbol it does not have to land on any enabled pay line as it pays out regardless of position. As long as three or more are on the screen it will pay out.

Five of the Mystery Star scatter symbols will usually pay out higher than the red sevens and are considered the most valuable symbol in the online slot game. Being a simple classic type of online slot game, the scatters do not trigger any bonus features.

This Novomatic online slot at online casino Philippines comes equipped with a gamble feature. This is enabled by clicking the gamble button below the Mystery Star reels after any winning combination lands on the reels. The winning amount can be gambled to have the amount doubled up by playing a guessing game.

The aim is to correctly guess whether a face down playing card is a red card or a black card before it is revealed. Correct guesses mean the winning amount is doubled but an incorrect guess will result in the gambled amount being lost.