There is a distinctly Irish flavour to Faeries Fortune, a slot title from Big Time Gaming. The Poker symbols are drawn in illuminated letters, like those found in the Book of Kells, the faeries themselves are wearing outfits more often seen on leprechauns, and pots of gold and shamrocks feature prominently in the iconography.

Faeries Fortune offers fairly standard slot play, on five reels with 40 fixed paylines, but its bonus features make it worthwhile. Each reel displays four windows, but all of the symbols can arrive in super-sized versions called Mega Icons, which cover four, nine or even 16 windows at once. Players have to play all 40 lines on every spin, but they can vary the bet per line from 0.01 to 10.00 in the appropriate currency.

Faeries Fortune uses only six symbols in regular play, which improves the odds of winning combinations forming. Of the traditional slot Poker symbols, only the A, K and Q is used. The highest prize among these symbols is 60 coins, for five As on one payline.

There are three higher-value symbols; a four-leafed clover or shamrock, a lucky horseshoe, and an ancient Ogham rune with a three-pointed star in a circle. This rune pays out 2 coins for Two of a Kind, 20 coins for three matches, 100 coins for four matches, and 500 coins for Five of a Kind.

Wild Substitutes and Wins its Own Prizes

A simple red block with the word Wild in it serves as the Faeries Fortune slot’s Wild, with the usual role of standing in for all other icons except the bonus Scatters, to create more potential wins. The Wild also wins prizes for two or more matches in sequence from the leftmost reel, on one payline. Players win 5, 40, 300 or 1,000 coins for two, three, four or five Wilds in sequence. 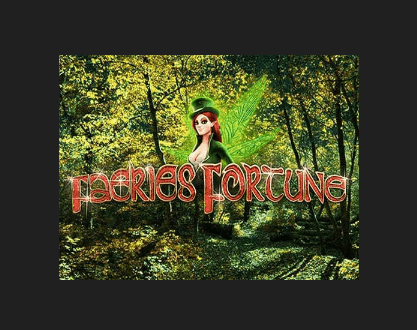 All the casino slot symbols in Faeries Fortune can appear as Mega Icons, covering grids of windows in a 2X2, 3X3 or even 4X4 pattern. However, the three different bonus triggers always arrive as Mega Icons, and just one is enough to trigger the relevant bonus, as long as it comes to rest covering at least three windows.

A large gold coin is the free spins trigger, and the number of free spins it awards depends on the number of windows covered by the icon; the total can thus be as high as 16. The free spins can also be retriggered during the bonus round. The best part of the feature is that normal one-window icons appear on Reel 1 during free spins, but the other four reels feature only 4X4 Mega Icons, which can produce huge multiple wins.

Apart from free spins, the Faeries Fortune slot also offers a Faeries Gems bonus and a Big Pots of Luck feature. The first is triggered by a Mega Icon of a faerie in her leprechaun garb, and the player is awarded a key for each window the icon covers. Again, the maximum is 16. These keys then unlock multipliers of between X40 and X4,000, which are applied to the total bet for the spin.

A Pot of Gold Mega Icon is the third Scatter, and it presents the player with a chest for every window covered by the icon. Players must choose chests to win bonus prizes of between X80 and X20,000 the line bet.