Lost Temple video slot features lush vegetation and a distant temple in the background, which echoes the adventurous theme of the slot title. Players will be transported to an adventure of discovery and exploration. The graphics are simple and the interface is easy to become accustomed to with ways to win rather than specific paylines.

The reel symbols in Lost Temple are all themed around and related to the adventure in seeking the unknown and forgotten relics of the past. Players can expect to see snakes, scorpions, jewels and a treasure chest overflowing with gold coins.

Traditional playing card icons such as the Nine, Ten, Jack, Queen, King, and the Ace represent the lower value symbols. These symbols are wrapped up in vines and have pink jewels intertwined into their fabric alongside various muted hues which echo the notion of the undiscovered forgotten world.

The blonde haired, blue-eyed maiden represents the wild symbol in Lost Temple real money slots. The wild will act as any typical wild with the ability to substitute for all other symbols in the game apart from the scatter bonus symbol.

The temple graphic represents the scatter bonus symbol of the game. Players will recognise this symbol immediately as the word bonus is clearly displayed across the symbol. 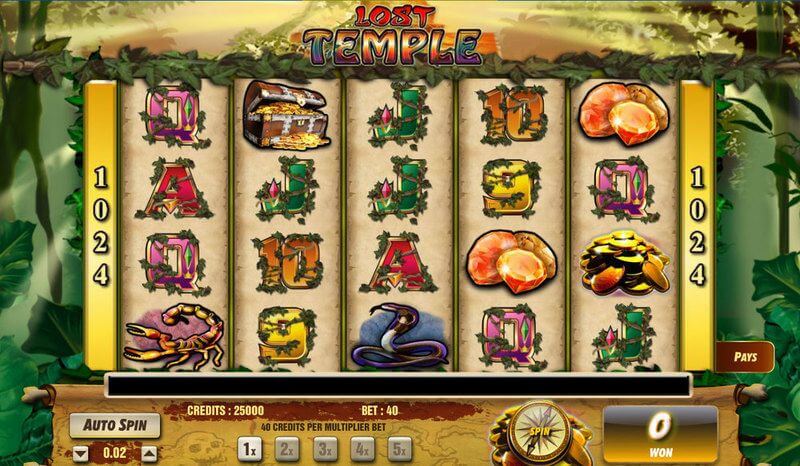 If players manage to trigger the temple steps bonus feature, players will be transported to a pyramid where a choice of step must be selected from the highlighted area of the pyramid on screen. Once a step has been selected it will reveal a red or green arrow. A green arrow will allow players to progress to the next step, while a red arrow will subsequently end the temple steps bonus feature and award the free spins with the relevant multiplier associated with the level the feature has ended on.

The first level of the temple steps bonus feature will award six free spins coupled with a 2X multiplier. The top level of the pyramid will award players with twelve free spins coupled with a 8X multiplier. Players should be aware that all free spins are wagered at the stake of the triggering amount. The multipliers will increase the winnings, which is a generous feature that can be retriggered during the bonus round of the video slot.