Monopoly Once Around Deluxe is an online video slot game that is produced by Williams Interactive better known as WMS. This slot game is based on the iconic Monopoly board game where players use their skills to buy up properties around the board in order to make the most money.

Monopoly Once Around Deluxe slot incorporates the all the main board game characters and features into the theme, giving players the feeling that they are a part of the game themselves. The backdrop to the game is a panoramic view of the city at night. The high quality graphics, animation and background images are crisp and clear giving the game high quality feel.

A Slot Based on the Classic Board Game

Monopoly Once Around Deluxe slot game is based on the classic setup of five spinning reels with 15 paylines. On the reels, players will find all the main characters and images from the classic board game including Mr Monopoly himself, his dog, the income tax symbol, the free parking symbol, the car, the boot as well as the much sought after properties like the train station, the water works and the electricity company. The game itself also includes a number of bonus features in the form of a wild symbol; scatter symbols and a Monopoly bonus round. 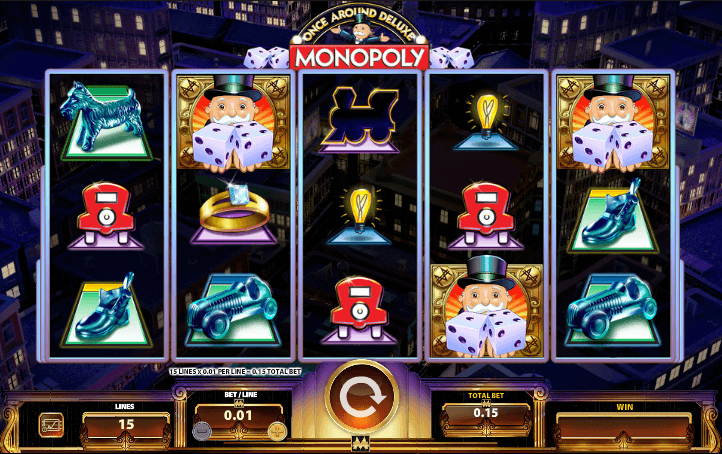 The wild symbol in Monopoly Once Around Deluxe slot is played by Mr Monopoly himself. He is also used as the bonus symbol where he is seen holding two dice. In this game, the wild symbol can be used to substitute for any of the other standard reel symbols to form a winning combination. The only two symbols the wild symbol cannot substitute for are the two scatter symbols, the community chest card and the chance card. The scatter symbols pay in any position on the reels and are multiplied by the players total bet stake.

Triggering the Once Around Bonus Round

In the bonus round, players advance around the monopoly board by rolling the dice and moving the number of spaces shown on the dice. On the way players can pick up cash prizes and free spins.

Play around the Board and Win Prizes