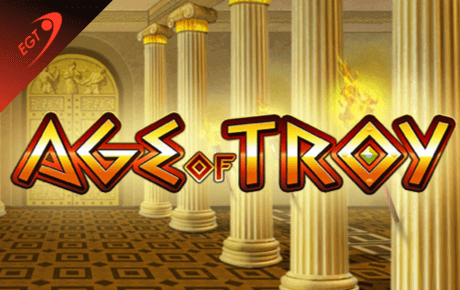 This slot game from EGT is based on the famous battle of Troy, which starred the great Achilles and was started over the love between Helen of Troy and Prince Paris. It is definitely one for the history books, and clearly slot games as this Age Of Troy slot demonstrates through its colourful graphics and big jackpots. The theme overall is well constructed with the developers taking care to include the appropriate aspects across the different slot mediums like backdrop, sound effects and reels. This is definitely an entertaining atmosphere to play the reels amidst.

The situation on the reels is also inspired, with many different and germane icons making a representation. This slot is a 5 reel game with a set of 20 fixed pay lines to mark the places for potential winning combinations to be hit. There is a decent selection of betting though, despite the fixed pay lines. Not to be left out, the bonus features of this Age Of Troy slot game are definitely beneficial. There is a Wild symbol to make use of and a free spins feature. There is also a gamble option should players choose.

Theme Choice and Portrayal in this Slot

The theme of Ancient Greece does hold a lot of mystery and frankly wealth associated with it. Add to this the historic value attached, particularly to this Trojan era, and the theme practically sells the slot. The team at EGT have done a good job of putting this altogether, because whilst it may all look good on paper, bringing such a theme together on the reels takes a certain care. The graphics are appealing, whilst not being overbearing or dominant on the slot. The sound effects and enthusiastically Trojan backdrop also lend weight to this theme and the effects on the players while they spin in this Age Of Troy slot game. 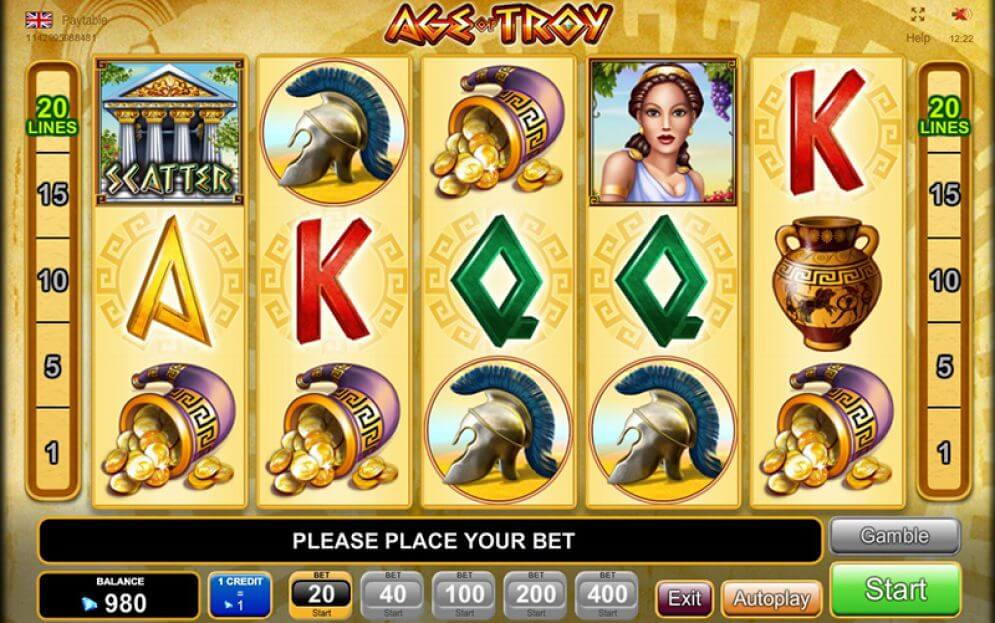 On theses 5 reels players will find a smattering of game symbols each with a different value attached and capable of dishing out some decent jackpots. Some of the symbols found in this game are pots of gold, Achilles’ helmet, an Armada of ships, Helen of Troy and even Prince Paris. The last symbol their winning an impressive 20 000 times the line bet when 5 land across a pay line.

So as not to clutter the base gameplay of this Age Of Troy slot, the developers only included a few more pertinent and effective bonus features into the game. The first of these is the Trojan Horse Wild symbol that has that uncanny ability to infiltrate and impersonate, even on these reels, and can net a few extra wins.

The free spins feature is triggered through the Sacred Temple Scatter symbol and more specifically the landing of 3 of them on the reels. This wins 12 free spins where the Wilds can appear stacked and so capable of hitting more wins. These spins can be triggered again. There is also a gamble option in the game where players can double their winnings by guessing the colour of a card.