Magic, tricks, and illusions are the themes of this slot by iSoftBet. Illusions 2 is 5 reel, 30 payline online casino slot game available on desktop, smart phone, tablet, and laptop, and features wilds and a special Illusion Bonus Feature.

Illusion 2 is set on a beautiful theatre stage with red curtains and a black, stylish background behind the reels. All the symbols in the game will be instantly recognisable to any who have been in the audience to a magic show, where symbols of higher value are made up of magic related images. This includes a rabbit in a hat, a magician’s assistant, a bouquet of flowers, and a crystal ball. The other symbols, which have a lower value, are comprised of the standard numbers and letters, albeit stylized to the aesthetic of your favourite online pokies. The music track that plays during the game is slow and pleasant, with tons of atmosphere.

Gameplay in Illusions 2 is the same as most other iSoftBet creations, where 5 reels and 30 paylines hang above all the betting and line selections, as well as total and winnings displays. To the far right hand side, players can check the paytable to learn more information about Illusion 2, including the general rules of the game and how the symbols work in different combinations. Below the paytable button is the bet amount, where the player can choose casino’s betting amount that is deducted from the total whenever a spin is made. Across the bottom of the game are the standard betting options, ranging from the bet per line to the number of lines active during gameplay. 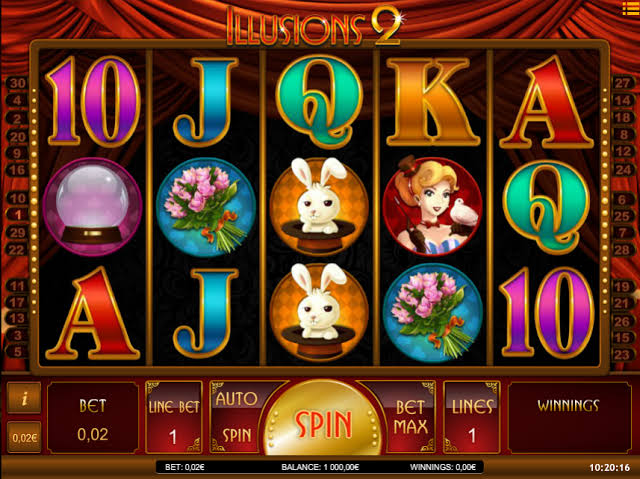 The first bonus included in Illusions 2 is the wild symbol, which works as an active multiplier. Whenever the wild lands somewhere on the reels, an instant multiplier is given to the player, ranging from 2x all the way up to 5x, and is added to the total stake. Multiple wilds can be combined during a single round, and each multiplier from every wild is calculated together into a total amount.

3 or more Illusion 2 Bonus Symbols are needed in order to start up the Illusion Bonus Feature. Once activated, players can make a choice of different free spin and multiplier options.

The magician is another special symbol in Illusions 2 that can land during base gameplay. The magician will perform tricks on the symbols that are in place, turning them into expanded wilds that spread out over an entire reel, which will last for as long as the magician feature is in play. These tricks can be applied to multiple reels at a time; meaning large accumulated winnings are a possibility. Additionally, the multiplier wild can also be used during the bonus magician feature, meaning there can be full sets of wilds over entire sets of reels at any given time, with the right amount of luck.

Illusions 2 will be especially appealing to lovers of all things magical, with the bonus features adding an extra level of appeal.