Here’s an online slot game for the Trekkie players out there, with all the necessary requirements that online video slots of today have come to be expected to have. On the face of it this online slot game has some decent graphics, a dense range of characters, references and more from the movies themselves and otherwise an enthusiastic approach to producing this all on the screen for the players. Star Trek Against All Odds online slot was developed by IGT games, a leading producer of games from this industry. Overall the result is a rather unique slot game experience amongst some of the best space explorers ever.

Always one to look for a bit of variety in their works, IGT games have given this online slot a rather unique set of reels, which form a sort of hexagon shape, with a reducing number of rows working from the middle reel outwards. The pay lines from this, or rather lack thereof, consist of 720 ways to win, with the game paying out on adjacent combinations and from both left to right and vice versa. In the long run this might not make much of difference but it sure is something different and rather exciting. There are even a few bonus features in Star Trek Against All Odds online slot, including some creative Wilds and an interactive bonus game, themed of course.

Exploring the Perimeter of the Theme

It’s rather bold to go where IGT games have gone and create a game with a theme like Star Trek Against All Odds online slot has, since it tends to target a rather peculiar group of people who tend to be sticklers for the rules, and potentially difficult to then appease. However with this online slot it seems even the most ardent of Trekkies will find it rather appealing, with a definite sense of rig moral adhered to in its construction so that the characters, sound effects and even backdrop accurately create a working atmosphere for the theme. The graphics of the game definitely play a significant role in this pursuit, certainly for the better. 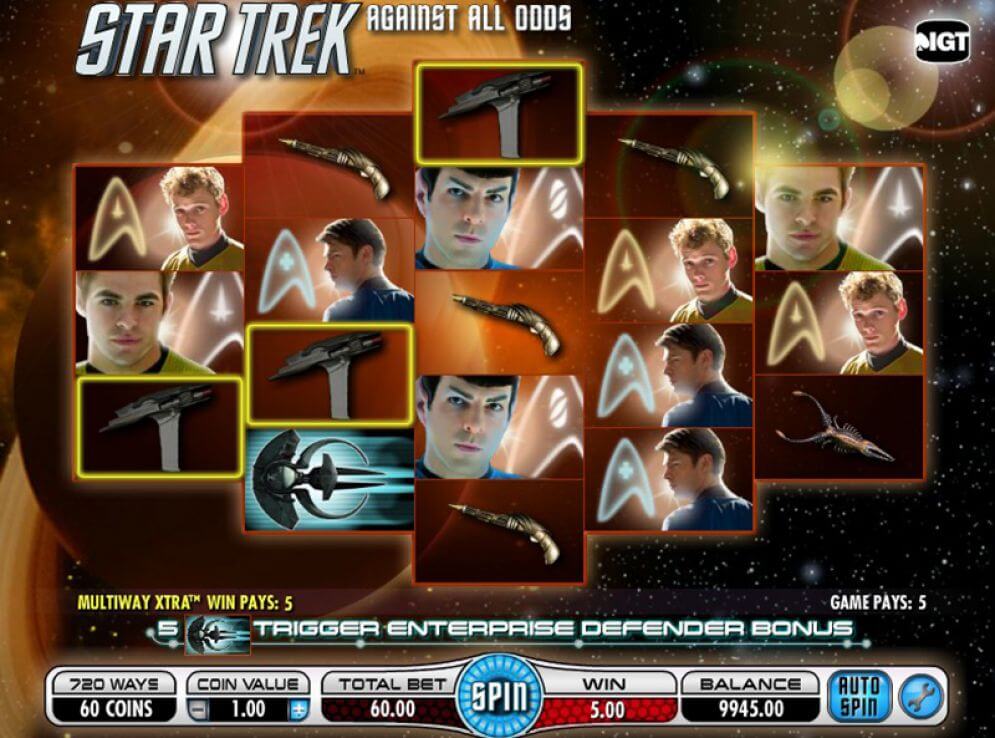 Taking a slightly closer look at the unique hexagonal set of reels of this slot game and we find there are quite a few interesting looking symbols, of which actual pictures from the movies seem to have been employed and make this part of the game quite relatable. The symbols in Star Trek Against All Odds include Kirk, Spock and McCoy as the members of the Enterprise involved in this game, whilst others like the Federation logo and even a phaser add a bit more volume to the proceedings.

Bonuses aboard the Enterprise in this Slot

Of course IGT games would include a few bonus features alongside their Star Trek Against All Odds slot game, given the theme and the current demand from video slot games as of late. In this game players will find Wild symbols for starters, which are randomly awarded to the players after a spin and which results in between 2 and 5 of the central 3 reels’ symbols to turn Wild, a rather rewarding offer given the aforementioned 720 ways to win.

The bonus game in this Star Trek Against All Odds slot involves players defending the Enterprise against a Romulan attack, by utilising the cursor in an interactive manner. This is triggered through the Romulan symbols on the reels and can result in up to 22500 times multiplier alongside a randomly awarded prize post game. Overall a pretty good slot package.