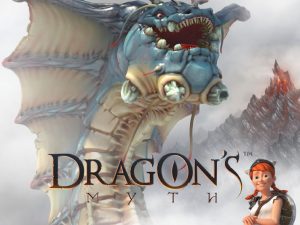 The Dragon’s Myth slot is set in some beautiful mountainous and craggy land in the north somewhere, where the land is plagued by four evil dragons. There is a feisty red haired girl as one of the symbols, who is designed to fight the dragons with her bow and arrow, and who celebrates each win of the player with a little dance. The symbols, like in all Rabcat games, are inspired and detailed, from the red lizard to the gigantic dragons that have to be found.

This Game Will Suit All Players

Despite the adventure the Dragon’s Myth slot offers players, everyone who enjoys playing slots games will find many appealing features, whether he plays for small stakes or big stakes. Dragon’s Myth slot has five transparent reels, through which one can see the attractive backdrop, with three rows and twenty fixed pay lines.

There are some interesting and innovative bonus games on offer in Dragon’s Myth slot game. Four different dragons represent the high value symbols in Dragon’s Myth slot, and the lower value symbols are made up with the standard playing cards, Jack, Queen, King and Ace. The Wild is the girl’s face, and like all Wilds can replace any of the other symbols except for the Scatter. The Free spins icon will activate the main feature of the game.

The Spin button doubles as a way for the player to keep track on how many dragons he has captured. While play is in operation, the bottom right square acts as a metal cage, and if the player lands a dragon icon on that square, one of the four bars around the Spin button will light up. If all four dragons are captured and put into cages, there will be a good cash payout, and the feature will reset. Moreover, if the player is lucky enough to form a winning combination with one of the Dragon icons, there will be a short video of the dragon running right at him.

The player will be taken to this feature, the Dragon’s Cave, by the girl pedalling through the air in a flying contraption. The player may then choose which of the flaming symbol on reels two and four that he wants to remain a fixed Wild throughout the next three free spins. This feature can also be reactivated, which can bring even more wins, and make the red haired girl dance for joy again.

Dragon’s Myth slot also has the Win and gamble feature. After each win, the player has the option of choosing either the yellow or blue egg. If the right one is chosen the total bet will be doubled, but if the guess is incorrect all wins will be lost.