The fictional zombie character has come a long way since its assumed origin in George Romero’s Night of the Living Dead.  The world of the undead has been adapted into various books and films.  We seem to be particularly fond of writing these flesh-hungry monsters into stories in terrifying ways, only to have them annihilated by heroic humans in the end.

Cryptologic’s The Zombies slot revolves around the idea of human vs. zombie.  The online video slot features 5 reels and 50 paylines, two modes of play – Power and Easy – and 2 Bonus Games.

Symbols include a red letterbox, a pair of trash cans, Daisies, a zombie and individual members of a family.  During the Easy mode game, the symbols appear intact, but anarchy obviously reigns during the Power mode game.  The symbols appear to be destroyed by an unseen force – the trash cans are turned on their sides, the letterbox hangs open and the newspaper has been torn in two.

Wins are scored by landing a combination of 3 or more matching symbols on any one payline.

The Zombies slot includes a scatter symbol, represented by a symbol featuring the human family. 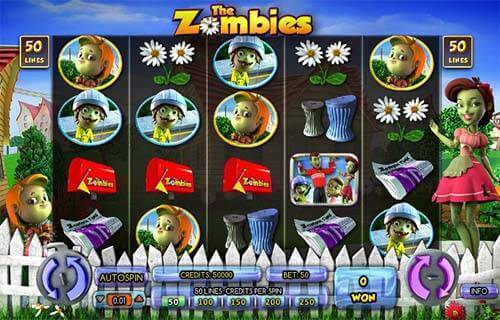 Whenever three or more of the family symbol scatters appear on the reels during any one spin, the Zombie Dance Party Free Spins Game is spun into action.  10 Free Spins are awarded.  The feature can be re-triggered from a free spins game already in motion.

The Zombie Bonus Game is activated by landing the mother or father symbol simulteneously with the zombie symbol on the reels.

This is an interactive bonus game, and the player must now choose a weapon of choice for defeating the undead.  The options are: a duck, a boot, a football and a horn.  Each item represents a certain multiplier value.  Three attempts are granted to try and hit a zombie. If the weapon used turns out to be the lucky weapon, the multiplier associated with that weapon is won. The duck multiplies your bet by X50, the boot by X20, the football holds a X10 multiplier, and the horn blasts in at a X5 multiplier.

A X9 multiplier consolation prize is awarded in the event that no wins are scored during the Zombie Bonus Game.

The Zombie Bonus Game can be triggered during normal play, or from within the Zombie Dance Party Free Spins Game.

The Zombie Slot Modes Of Play: Power Or Easy

In Power mode wins are paid from left to right, and in Easy mode it is the other way around.

The Zombie Online Spielautomaten in Deutschland features 50 fixed paylines – this means that a bet must be placed on each of the 50 paylines.

Minimum bet starts at 0.05 credits per payline.  Playing at maximum bet requires a total wager of 250 credits per spin.