Under the Sea slot is a detailed animated online and mobile slot from Betsoft. The game has thirty paylines which can be played for up to five coins per line. Each of the paylines can be activated individually, and each coin can be worth from 0.02 up to 0.50 currency units. This puts Under the Sea slot in the category of penny slots which makes it affordable for those with a lower budget. The game has a number of special features including a free spins round and a separate bonus round.

Under the Sea slot is set not very surprisingly under the sea. This gives the slot an overall blue colour and a rather relaxing feel. Ocean sounds like crashing waves, bubbles and seagulls can be heard in the background at all times. When the reels spin, a Caribbean tune plays which heats up if you get one or more scatters. The graphics in Under the Sea slot are all 3D and look like they have come from a video game. The background moves constantly with waving seaweed and floating bubbles. Light plays on the reels and the foreground looking like it has been filtered through water. 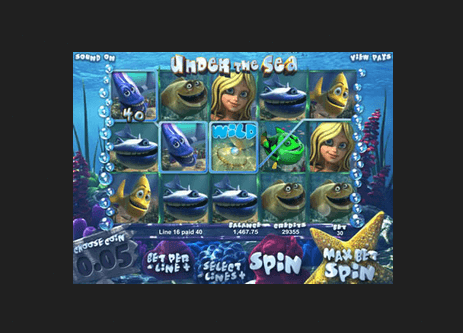 Under the Sea Special Features

Under the Sea online slot has three main features. The first is the games wild symbol that can replace any other symbol except for the scatter and the bonus. This is a clam shell that opens to display a pearl. These wilds can be found on any reel, and carry with them a multiplier depending on how may of them you find. One wild on a line will award you with a 2x, two wilds and 4x and three wilds will get you 8x your win.

The sunken ship scatter can also be found on any reel. This will pay out scatter wins no matter where it is found. It will also grant a number of free spins, ranging from eight to fifteen. During the free spins round all wins will be doubled.

The final feature is Under the Sea slot’s bonus feature. Launched by finding three treasure chests, this feature is a basic Pick ‘em round. This is on a separate screen where you get to choose from a number of treasure chests. Each chest holds a prize and you can keep clicking until you get the Collect symbol. When this happens the game is over and all of your wins will be added to your total.